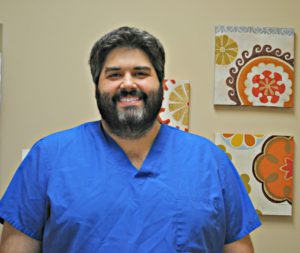 Dr. Joe Vescovo grew up in Memphis, TN. He attended Christian Brothers High School, where he graduated in the top ten in his class. He was active with football as well as wrestling and theater. Dr. Vescovo pursued his undergraduate studies at Rhodes College and graduated with a Bachelor’s Degree in Biology. During his time at the university, he played football, was a member of Sigma Alpha Epsilon and was very active at the McCoy Theater.

Dr. Vescovo received his Doctor of Dental Surgery degree from the University of Tennessee Health Science Center in Memphis. While in school, he was a member of the American Student Dental Association. He is a member of the American Dental Association and Memphis Dental Legion. He is married to Kristen Andrews Vescovo of Oviedo, Florida. Dr. Vescovo enjoys spending time with his family, acting, and UT football.